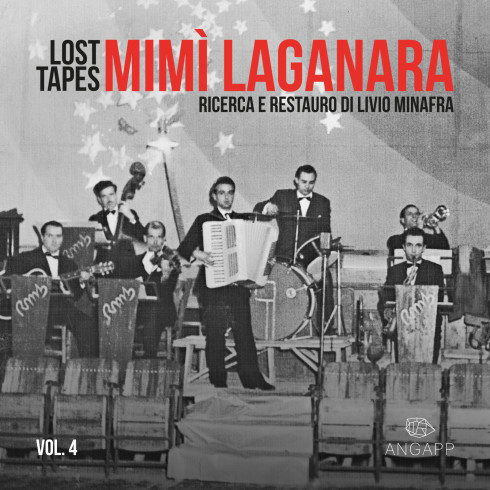 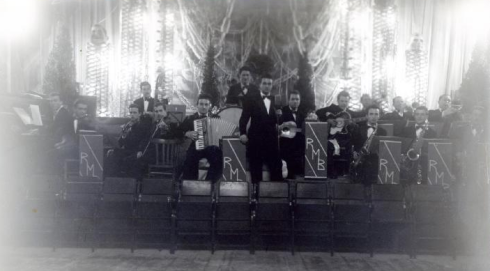 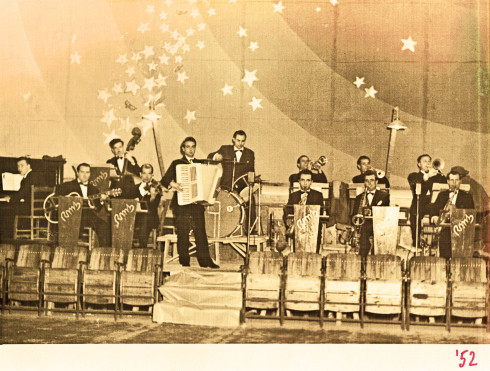 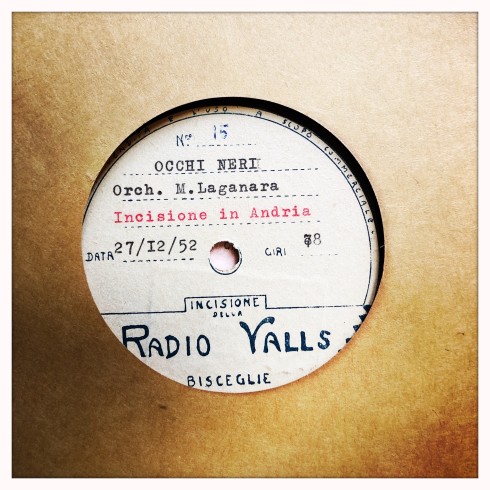 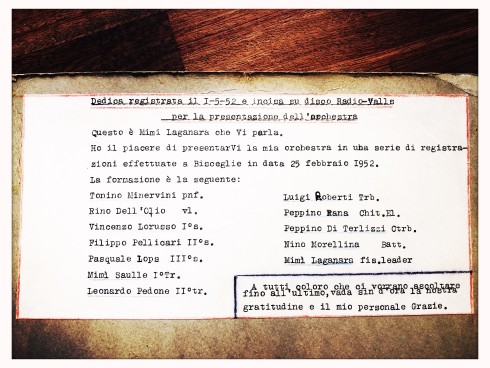 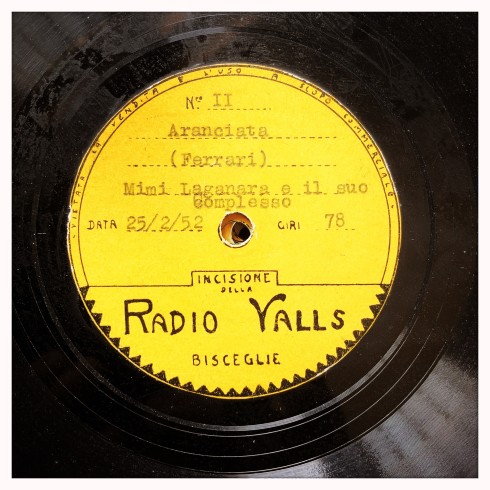 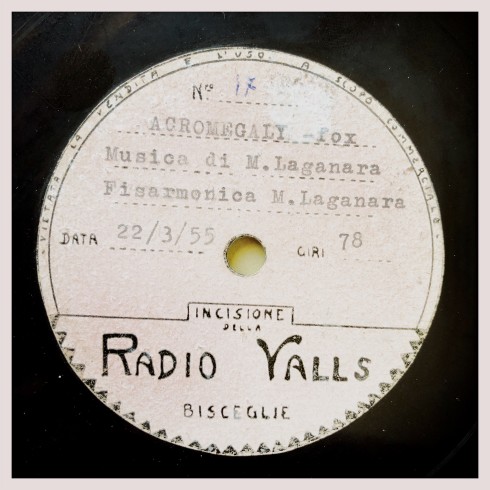 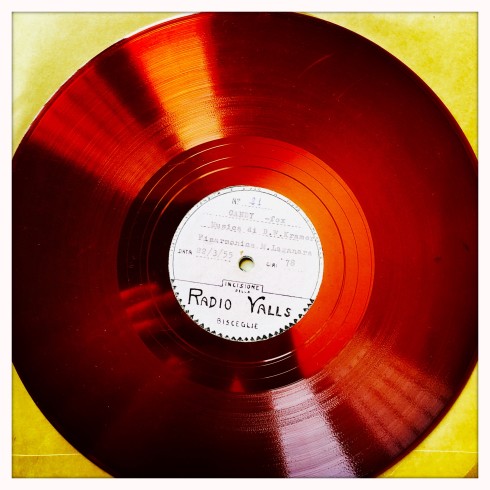 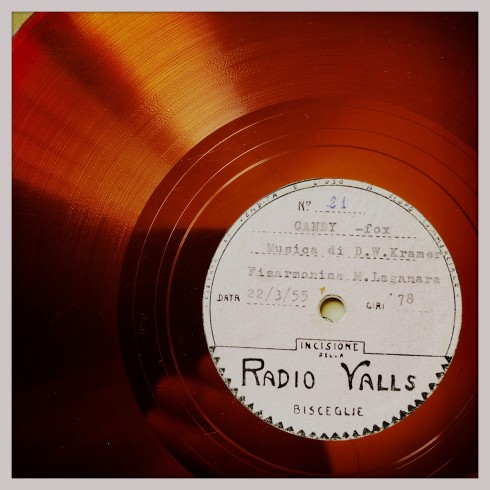 Domenico Laganara, called Mimì, was born into a family of music lovers. Born in Bisceglie on 13 October 1928 but native of Candela (Foggia), he was also soon started studying music. After a few years on the violin, however, Laganara fell back on the accordion with the then Maestro from Bari, Vavalle. Still, it is in 1944, at 16, that something special will happen, just like for Santino Di Rella and Santino Tedone. The Americans, together with the British, that year set up a jazz dance orchestra in Bisceglie, completing it with some local musicians including Laganara on the accordion. This experience, plus the purchase of numerous V-Discs directly from American soldiers for 50-100 lire, convinced him over the years to form a real Big Band that initially took the name of “Ragazzi Matti” in Italian or Crazy Boys or Crazy Band, because in Bisceglie there was a well-known asylum! And then with some of the musicians of that adventure plus the grafting of other musicians of the province and not, the “Mimì Laganara and his Orchestra” was born in 1949 which over time was defined with the lineup indicated below. In all of this, the arrangements, both pre-existing and original, were entirely revised and edited by Laganara who, between one exam and another of Medicine, drew thick scores. A team and a musician destined to lead the way with tours and record contracts if an episode in 1953 had never happened. The accordionist tells how in those days “it was not another era but another world”. Doctor at a retirement home run by nuns, he was faced with the decision to choose which path to follow since the nuns and religious of the time considered it “sinful” and “indecorous” to play dance music. Mimì, seized by a fit of anger, left everything, so the rise of a star turned into the passage of a comet whose glow is fortunately still sparkling thanks to some recordings made in those years. Precious finds dated 25/02/1952, 27/12/1952 (the Big Band) and 23/03/1955 (Acromegaly, Candy and Valzer in blue) which reveal a fine composer-arranger in the wake of Kramer, Barzizza, Petralia or Angelini as well as an organized band leader, and they reveal us a prestigious soloist like a Peppino Principe or a Pino Di Modugno. As you will hear the Big Band has an impact, with a beautiful shot, and includes soloists-improvisers from Ruvo di Puglia such as the excellent Enzo Lorusso on alto sax and clarinet, the fiery Filippo Pellicani on tenor sax and Menghino Saulle as the first trumpet. The recordings made almost by chance by Peppino Valls from Bisceglie with a philophone and now properly restored by several hands by Tommy Cavalieri, Martino Tempesta and Gianluca Caterina, revive that period, that freshness and that one-of-a-kind post-war enthusiasm. Particularly worth mentioning is the presence of a very young guitarist at the time, Peppino Rana, father of the pianist Enzo Rana and grandfather of the virtuoso classical pianist Beatrice Rana.

The repertoire ranged from American classics such as Duke Ellington, Woody Herman or Glenn Miller, which will be possible to listen to in the volume dedicated to Filippo Pellicani and Menghino Saulle, to our local Francesco Ferrari, Angelo Giacomazzi, Tullio Mobiglia, Guido Cergoli and Laganara himself. It must be said that in this CD we chose to privilege the Italian repertoire as it is unfairly mistreated today. Even in the case of Trombone Sentimentale (Cergoli), Senza Tregua and Negri a Zonzo (Giacomazzi), Aranciata (Ferrari), in addition to the three pieces by Laganara, these are the first recordings in the world. Complete the compilation goodies like always of his own composition with words by the then mayor of Bisceglie, Matteo dell’Olio and the American song Candy (Kramer-David-Whitney), in a version that transcends the passing of time since the accordionist recorded it in 1955, but the rhythm section was overdubbed by Antonio Ninni (drums), Fabio Lopez (double bass) and Nico Triggiani (Hondo electric guitar) in 2020, as in an ideal embrace and temporal reunion.

After his stop in 1953, we will find Laganara episodically as well as in 1975 in “Bisceglie Gershwin” in the company of the pianist Sante Palumbo in a tasty 45 rpm still available; for the rest, Laganara was Head of General Medicine and Infectious Diseases at the Vittorio Emanuele II Hospital in Bisceglie, where he now lives.